Given a history of successful collaborations on other building projects, officials at Oakwood University turned to JS Building Co. to manage construction for the complete modernization of the mid-century historic dormitory in the center of the university campus. Built in 1966, the four-story building presented a number of challenges, including the repair of structural damage, modernizing the aged mechanical room, and meeting current life/safety code. Reduced operational costs were a necessity as well.

Highlights included removing a stairwell to install an internal DC elevator; new shower/toilet and laundry facilities; new rooms for exercise, vending, breaks, and study; offices; a chapel; an apartment for the Dean; and resident suites for 266 students.

After authorization to proceed, JS Building Co. obtained a certificate of occupancy in 12 months. 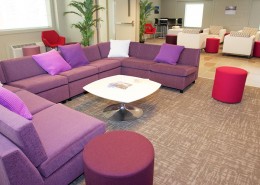